The original coal-fired CHP plant was commissioned in 1983 to supply the pharmaceutical company with power and process steam.

In 2004, the company decided to change from coal to biomass and asked AET to perform this conversion. Since then, AET has regularly supported Boehringer Ingelheim and ensured optimal performance of the plant.

In 2005, modifications of the ash handling and carbon re-injection systems were made in order to obtain a higher efficiency of the plant.

The upgrade utilises the ChlorOut system for protecting the internal parts of the boiler and the superheaters against high temperature and heavy metal-chloral salt layer corrosion and fouling.

The ChlorOut system is advanced, as it is a two-step injection with dedicated sulphate liquids in order to reach a certain KCl level and reduce emissions. The KCl level is monitored by an in-situ Alkali Chloride Monitor (IACM).

In 2016, Boehringer changed the chemical injection from ammonia sulphate to iron sulphate in order to avoid a high ammonia slip.

"In our conversion from coal to biomass, Boehringer Ingelheim partnered up with AET. In the process from first approach, design criteria, conversion job and further to commissioning & handover Boehringer Ingelheim felt confident with AETs high involvement and huge knowledge in the biomass & boiler technology. The plant is now converted for optimal operation and high performance." 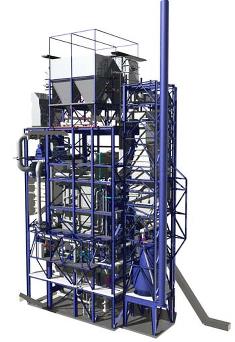 A 3D illustration of the Boehringer Ingelheim plant with the boiler at the bottom and the filter at the top.

The Boehringer-Ingelheim CHP plant in Germany.