Østkraft cogeneration plant supplies power and district heating to the habitants of Bornholm. The boiler (Block 6) was built in 1996 and originally designed with the possibility of using 20% biomass in the combustion process.

Anticipating the future stricter emission requirements in Europe, and in line with the goal of Bornholm to become a self-sufficient green island, investigations into how to use more biomass in the energy production were initiated in 2013. It was estimated that 60% of the biomass fuel can be supplied from the island of Bornholm itself.

It was, however, a requirement not to lose the fuel flexibility of firing with coal and oil. This flexibility was essential, as Østkraft is situated on an island and must be able to provide power in case of damage to the sub-sea cable between Denmark and Sweden.

In 2016, AET retrofitted and optimised the Østkraft cogeneration plant for utilising biomass, coal and oil. This rebuild included supplying, installing and commissioning AET Dosing Bins, AET Biomass Chutes, biomass fuel handling system and AET Combi Spreaders for both biomass and coal. The furnace was refurbished, the mechanical, instrumentation and electrical systems were modified and the secondary air system was upgraded to be able to use both biomass, coal and oil.

During Christmas 2017, the sub-sea cable between Denmark and Sweden was damaged and the power connection interrupted. Fortunately, this was not a problem as Østkraft was able to utilise the flexibility of the plant and increase production, so none of the inhabitants of Bornholm were left without power. 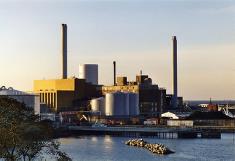