DRT, a world leader in the development of resin and turpentine extracted from pine resin, receives steam from the Biomass Energy Solutions VSG (BES-VSG) plant.

The plant produces 97 GWh of electricity/year and 214 GWh of steam/year without using fossil fuels. This reduces CO2 emissions by 20,000 tonnes/year as the plant efficiency will be more than 60%.

The biomass-fired cogeneration plant has an annual fuel input of 150,000 tonnes of forestry wood, and uncontaminated residues from wood processing and DerTal. DerTal is a tall-oil and by-product from DRT.

The performance of the boiler was successfully tested by Bureau Veritas in 2015: 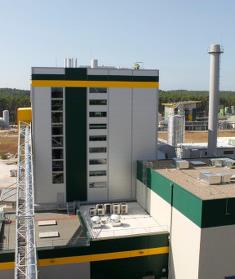